Locksmiths all over Surrey and South West London

[su_box title=”NIGHTLATCHES AND RIMLOCKS” style=”bubbles” title_color=”#ffffff” radius=”4″]These come in a wide variety of styles and in two sizes with many different capabilities. To know which size you have on your door, measure the distance between the edge of the door and the centre of the keyhole. If this distance is 44mm then you’ll have a narrow stile nightlatch. If the distance is 60mm then you’ll have a standard stile nightlatch. The following paragraphs only deal with the ‘cylinder’ nightlatches, not the ‘old fashioned’ oblong shaped levered rim locks and latches that you may find fitted onto very thin doors in old houses (often internal doors).

Rim nightlatches are sometimes referred to as ‘Yale’ locks, but of course Yale makes lots of different locks and lots of different lock manufacturers make rim locks! Most people with a timber entrance door or an older aluminium door will have one located about a third of the way down the door on the inner surface and you’ll use it to open and shut the door.

Below is some examples of High Security BS3621 Nightlatches available on the market today. We can supply and fit any nightlatch to increase your security at your property at very competitive prices.

These locks are the same as the nightlatches above except you can deadlock the latch from the outside with a turn of the key.  This means that the latch cannot be slipped with a piece of plastic (James Bond style).  Some of them also allow you to lock the turn knob on the inside with the same key (instead of the snib) and this will prevent slipping from outside and the knob being turned by sticks, cables and so on through the letter plate.

If you are replacing the nightlatch make sure you buy one that is certificated to  BS 3621:2007+A1:2009 Thief resistant lock assembly. Locks like this will be marked by the British Standard Kitemark.  This is the latest version of BS 3621, but it is likely that insurers will still accept locks certificated to the previous version, BS 3621:2004 or earlier versions, but check with your insurer.  These higher quality rim nightlatches will sometimes have a flat ended latching bolt which is thrown into the keep as the door closes.

The main ‘live’ bolt (or latch) in one of these has a rounded leading edge and is spring loaded. The latch is withdrawn into the casing as you turn the inside knob to allow you to open the door, but you can close the door by simply pushing the door into its frame – a sort of ‘slam to lock’. These locks always need a key to unlock them from the outside. The latch can be deadlocked in an open or closed position by sliding the snib on the inner face. [/su_box] 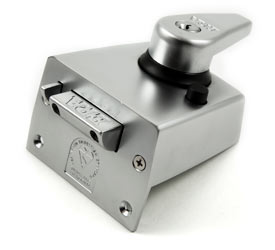 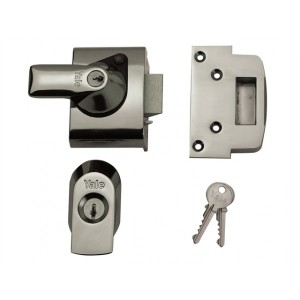